There are few car books that are not only on the bookshelf, but should be read. This book should be read by everyone who is interested in post-war automotive history. Ex-star reporter and head of department Harald Kaiser communicates the success story of the automobile in Germany and the world with his “look in the rear-view mirror” in an exciting and fascinating way.

When VW and the city of Wolfsburg celebrated the millionth beetle with timpani and trumpets, dancers from the Moulin Rouge, South African choirs and Scottish bagpipers on August 6, 1955, the million seller was the reason for the furious spectacle in front of 100.000 people, but the party was celebrated before all a man to whom all of this was owed: General Director Heinrich Nordhoff, the King of Wolfsburg, describes Harald Kaiser as celebrating the rise of Volkswagen.

Celebration of millions: The “King of Wolfsburg” Heinrich Nordhoff

"Our party was a look into the world that the Volkswagen has conquered and will continue to conquer", quotes the author Nordhoff and says: "Nordhoff's appearance could not have imagined a screenwriter in a dramatically more glamorous and textually accurate manner. He accepted the homage with his own mixture of self-confidence and self-confidence. ”21 million beetles were produced by 2003, the last of which left the production line in Mexico. Kaiser describes the years up to the first 10.000 vehicles as hardship-rich. In 1947, due to a lack of coal, production even had to be stopped at short notice. In 1948, 8.400 workers belonged to VW, average wages at that time: 1,11 marks an hour.

“Nordhoff was both a father figure and a patron in his empire. At that time he gave the city the most modern swimming pool in the nation worth a million marks, had VW's own building cooperative pull up settlement houses and built a well-equipped ledigen home. "City and company are one, and the passport in Nordhoff's territory is a blue ID card," wrote SPIEGEL in August 1955. Each furniture retailer gave 1000 or 2000 marks of credit to this ID card. "

Kaiser also does away with the legend that Ferdinand Porsche (alone) was the inventor of the beetle. “It is true that Porsche developed the car before the Second World War and presented it to the Nazi regime. But it is also true that the almost unknown Austrian automotive engineer Béla Baréyni had the idea for the "upcoming Volkswagen" as early as 1926. This is how Baréyni called his invention farsighted and already defined key design features at the time: boxer engine in the rear, air cooling, the engine arrangement behind and that of the gearbox in front of the rear axle. ”Baréyni later succeeded at Daimler-Benz as a gifted safety engineer, for example, the crumple zone invented in the car. Kaiser tells the exciting background behind the quarrel over the beetle's authorship, in which Baréyni ultimately won in court. I have never read that the then head of the Porsche press department, Richard von Frankenberg, tried under a pseudonym to disavow Baréyni's ingenuity.

Beetle advertisement in the fifties

Kaiser describes Nordhoff's personality with excitement. How he managed to get 400 out of 100 hours of work per car, that he slept on a cot in his office in order to be constantly responsive because production problems had to be eliminated at that time too. "The Volkswagen has more mistakes than a dog fleas," is one of the many legendary Nordhoff quotes. “In countless tests, Nordhoff had every section of the car improved over and over again. Until almost none of them were identical in quality, shape and dimensions to the original parts, ”reports Kaiser. It was also exciting to see how Nordhoff developed the export offensive to the USA and in 1971 five million Volkswagen cars were already rolling on American highways. A lesson for every marketing manager.

With empathy, as if he had known him personally, Kaiser illuminates Nordhoff's unique character. One wonders involuntarily what he would say today about diesel fraud or about the shift to electromobility. In any case, Nordhoff recognized early on that VW's success would also attract envy in Europe. Nevertheless, he built Volkswagen into a global brand.

This is how the Americans dreamed of the car future

Kaiser describes the invention of the car in 1886 with the Benz motor car in a reportage trip in which he himself almost overturned. There was no ESP electronic centrifugal brake in the motor car and the moose test was far from invented. This literary foray through the world of the automobile was absolutely successful. I have a lot of fat Auto History hams in my closet that haven't even seen the light outside their packaging. Usually cumbersome documentation of all technical data, but often without the necessary emotion. 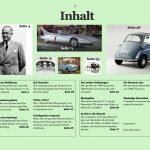 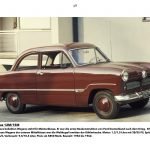 The new e-book is full of backgrounds and amusing stories. It can be downloaded at 9,99 euros

Kommentar hinterlassen to "Book Review:" Golden Times "by Harald Kaiser - a" Must Read ""